‘You could look all over the world without finding traditions that have lasted as long as the ones here.’ 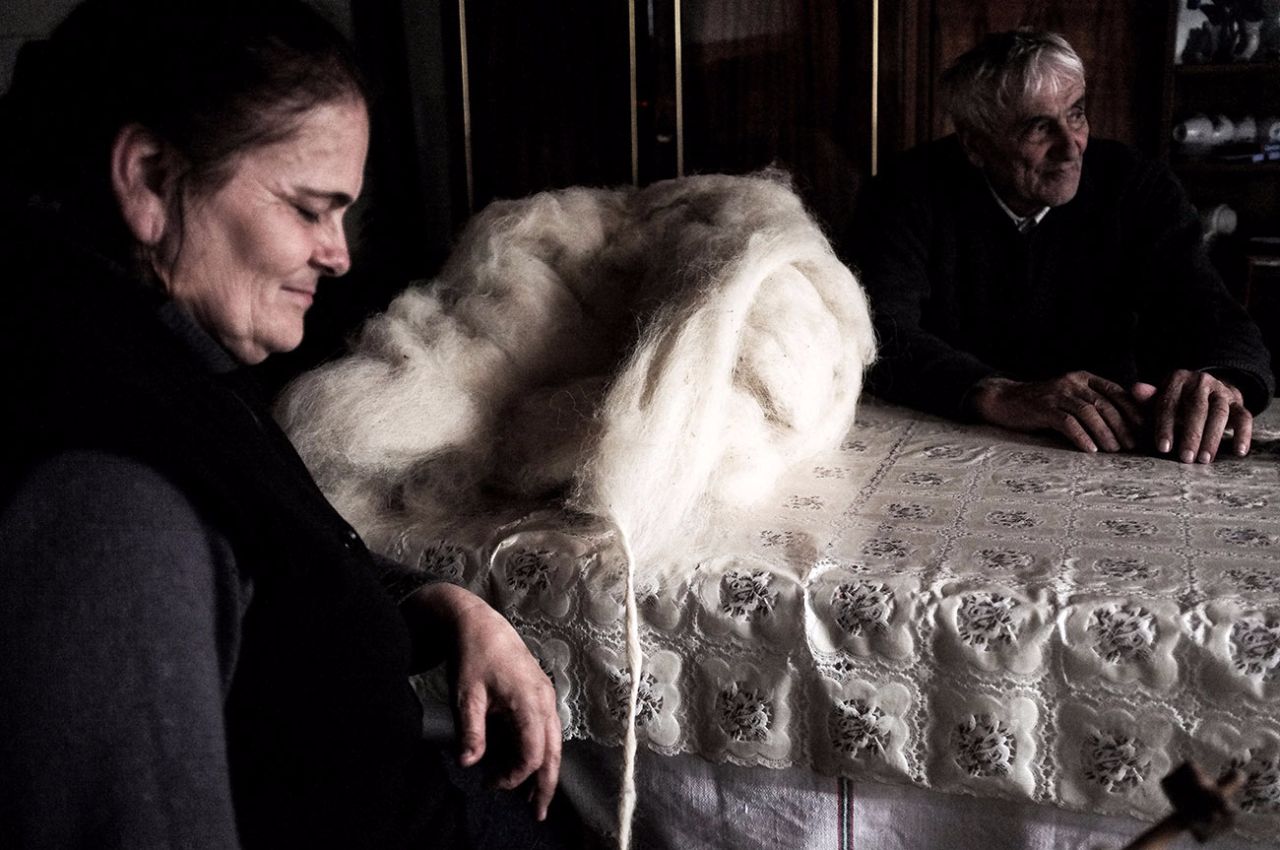 Maria Stetca, the former mayor of Săpânța, sits spinning wool in her kitchen with her husband. Maramureș, March 2015. 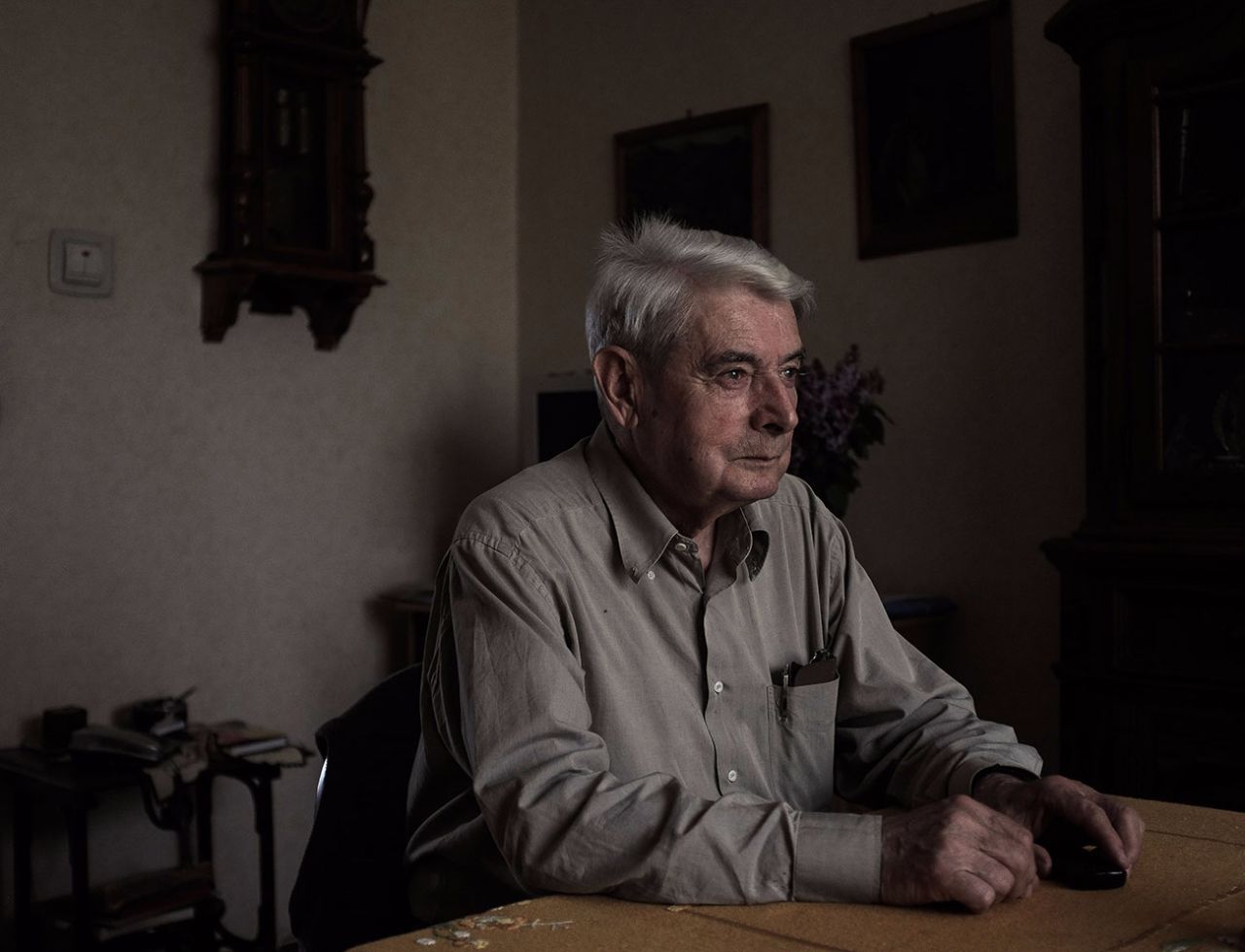 Iosif Beres, a former professor, sits in his kitchen in Sighetu Marmației. We went to visit Iosif to ask him about the landscape of murder in Maramureș. March 2015. 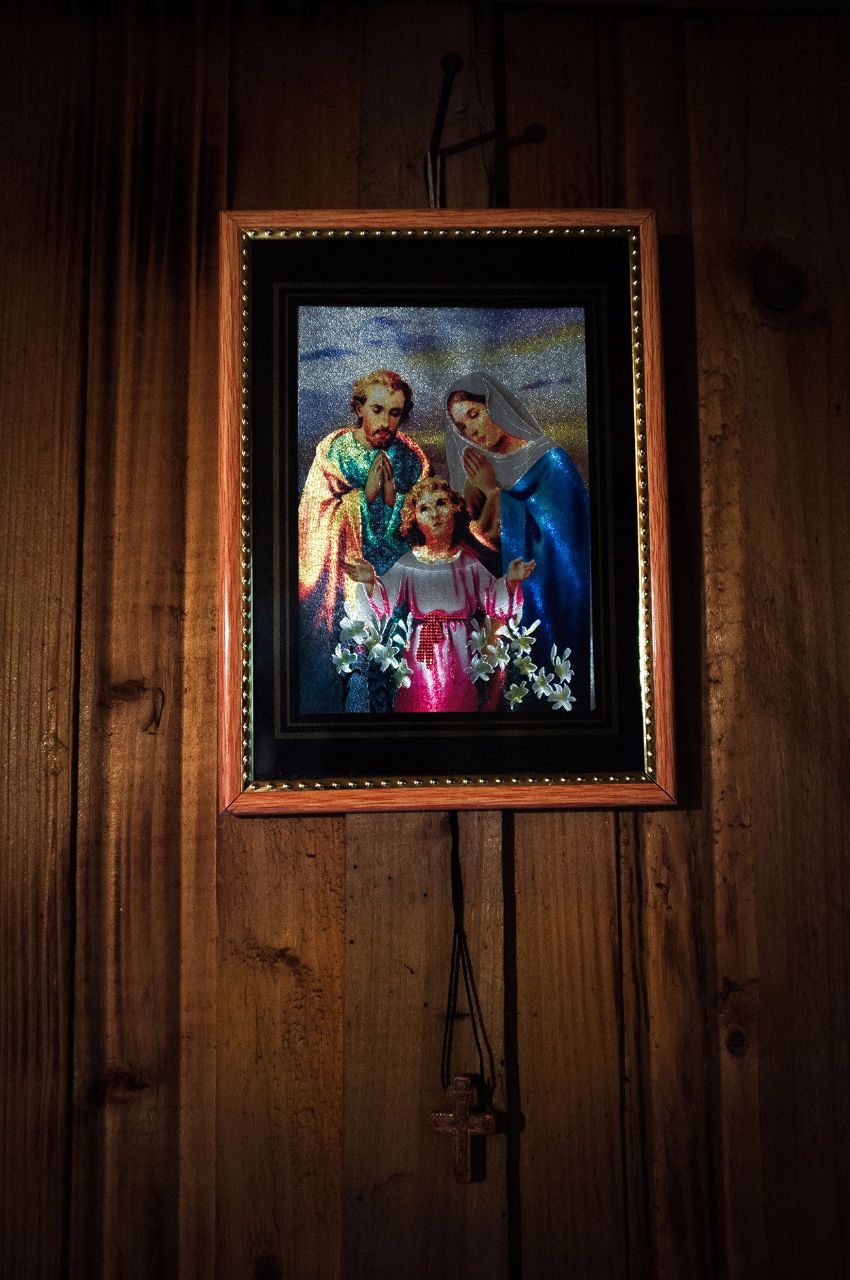 A portrait of Mary, Joseph and baby Jesus hangs in the Martinuc household. Maramureș, March 2015. 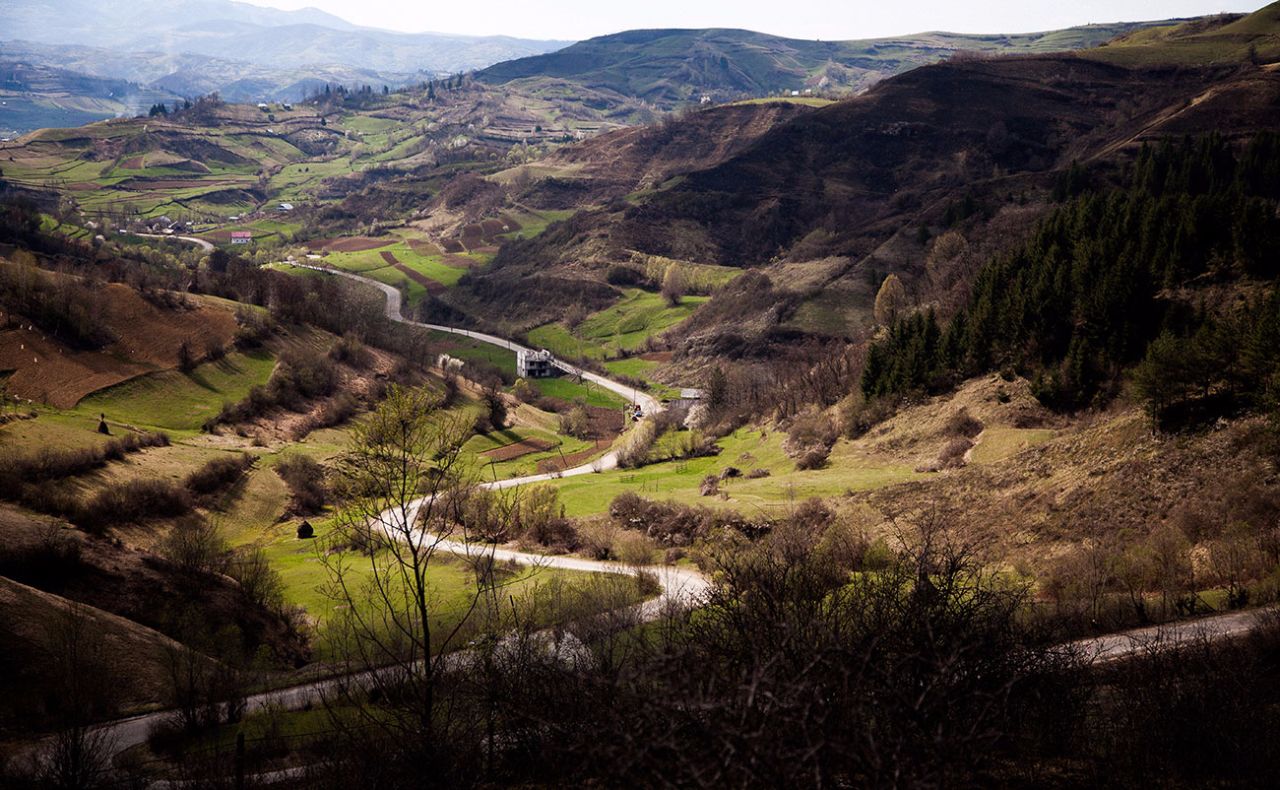 Looking out at the road leading through the valley towards Săliștea de Sus. Maramureș, March 2015. 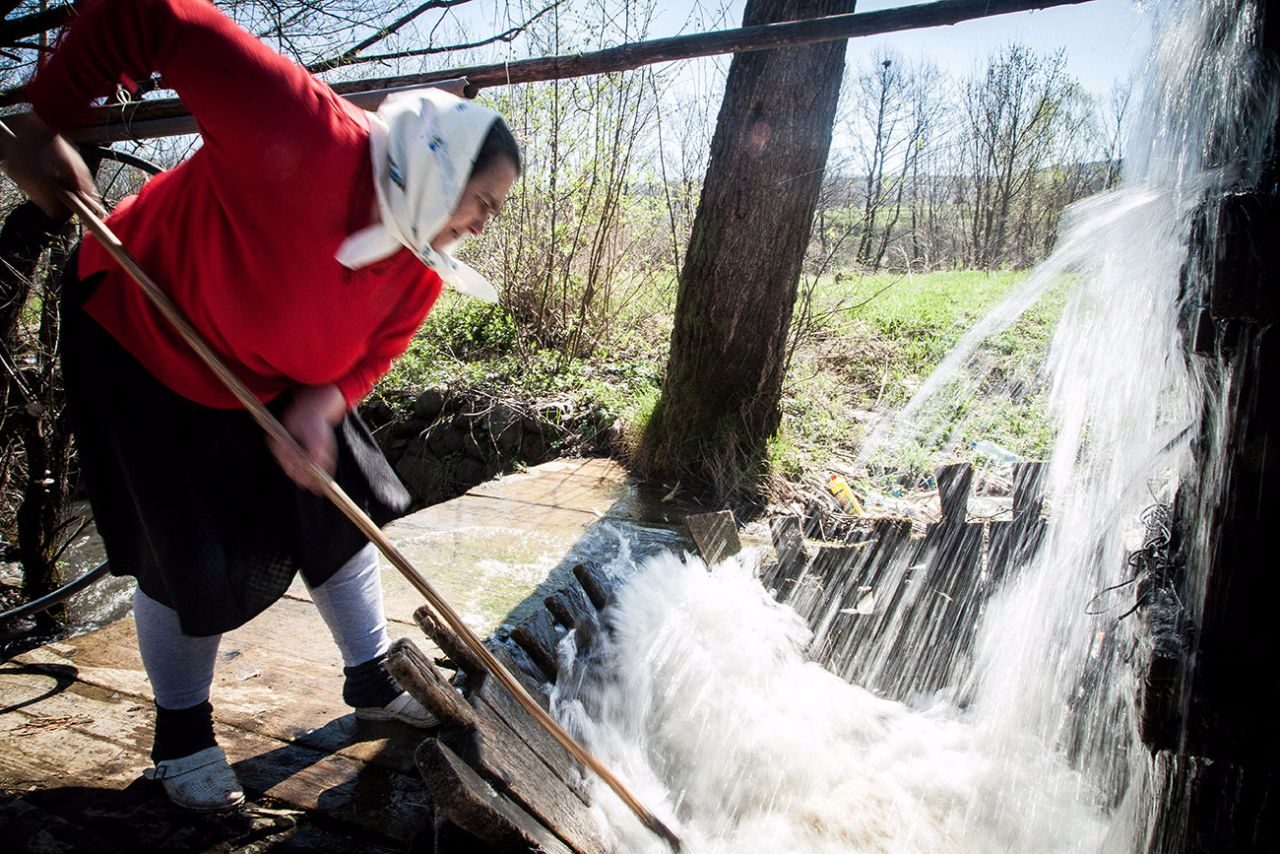 A woman washes carpets the traditional way, using a wooden canal to divert water into a pool, where she will then toss and turn the carpets with a wooden stick. Maramureș, March 2015. Vasile Sas on his way to ‘arrange his land’. All the fields must be cleared and ready to work on for the growing season. Maramureș, May 2015. 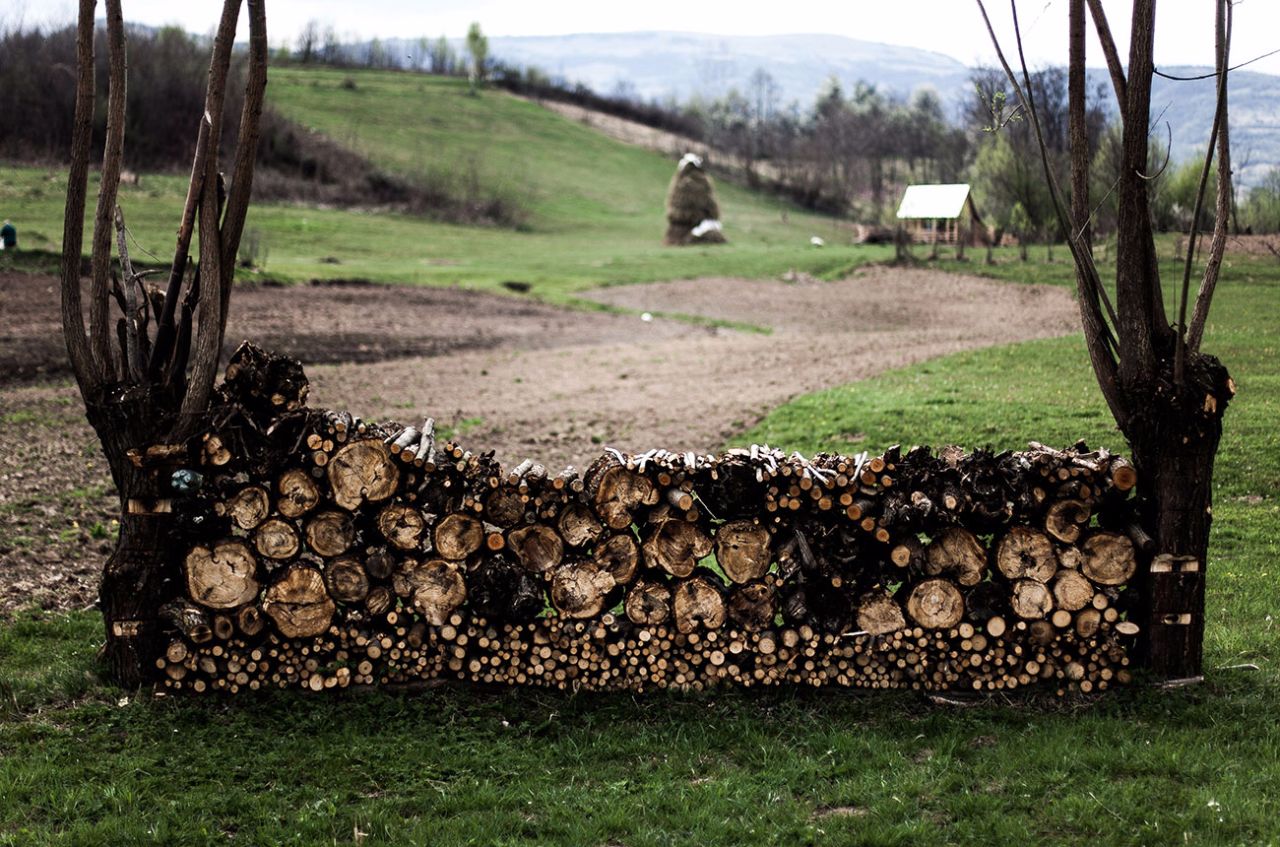 A log pile during the clearing season in Maramureș. Many people can be seen out in the field, making way for the summer ‘growing months’ and getting things into order. May 2015. Ilen Pasca (left) and her granddaughter (right) at home in Săliștea de Sus. Maramureș, May 2016. A portrait of Lanos Pasca in the living room of the Pasca household. He was murdered beside the river next to this very house after a dispute over land. His granddaughter was a baby, and in his hands at the time of the killing. Maramureș, May 2015. A fallen tree at the site of a murder. Farmer Todor Lumei was stabbed in the back by his neighbours here after a dispute over land in 1972. Maramureș, May 2015. 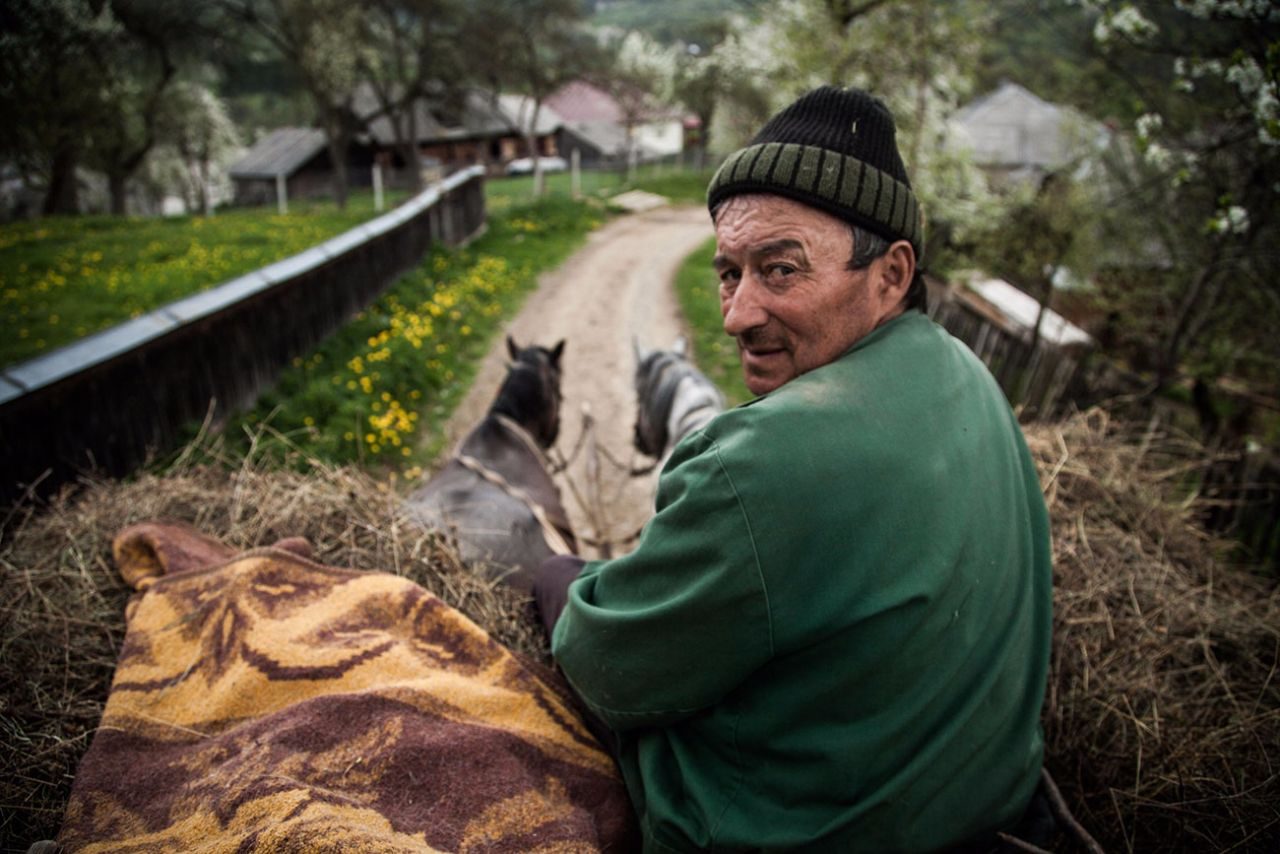 A farmer transports the grass he has been cutting back to his shed. It will be used to feed his animals during the winter. Maramureș, May 2015. 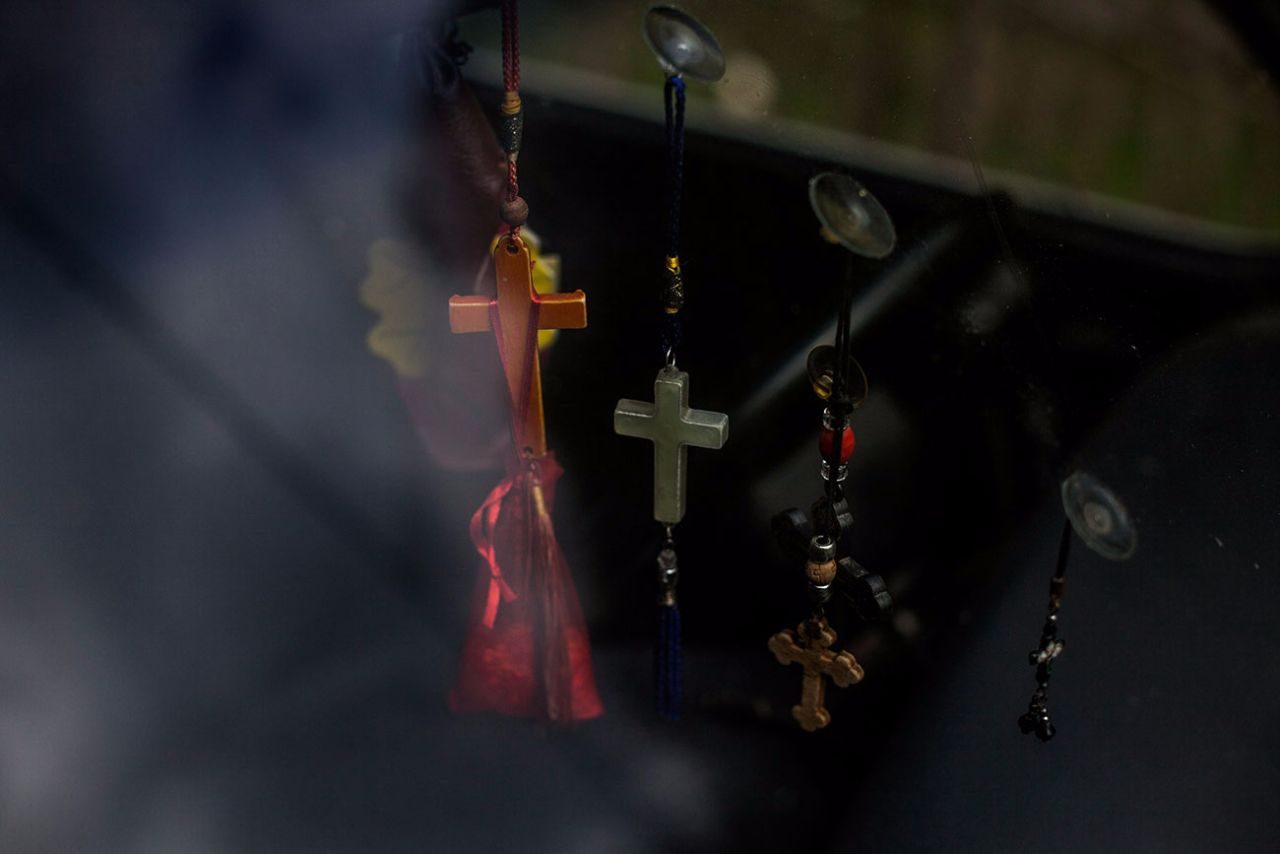 Iona Grad’s windscreen, up in the valley of Tătarului. Maramureș, March 2015. 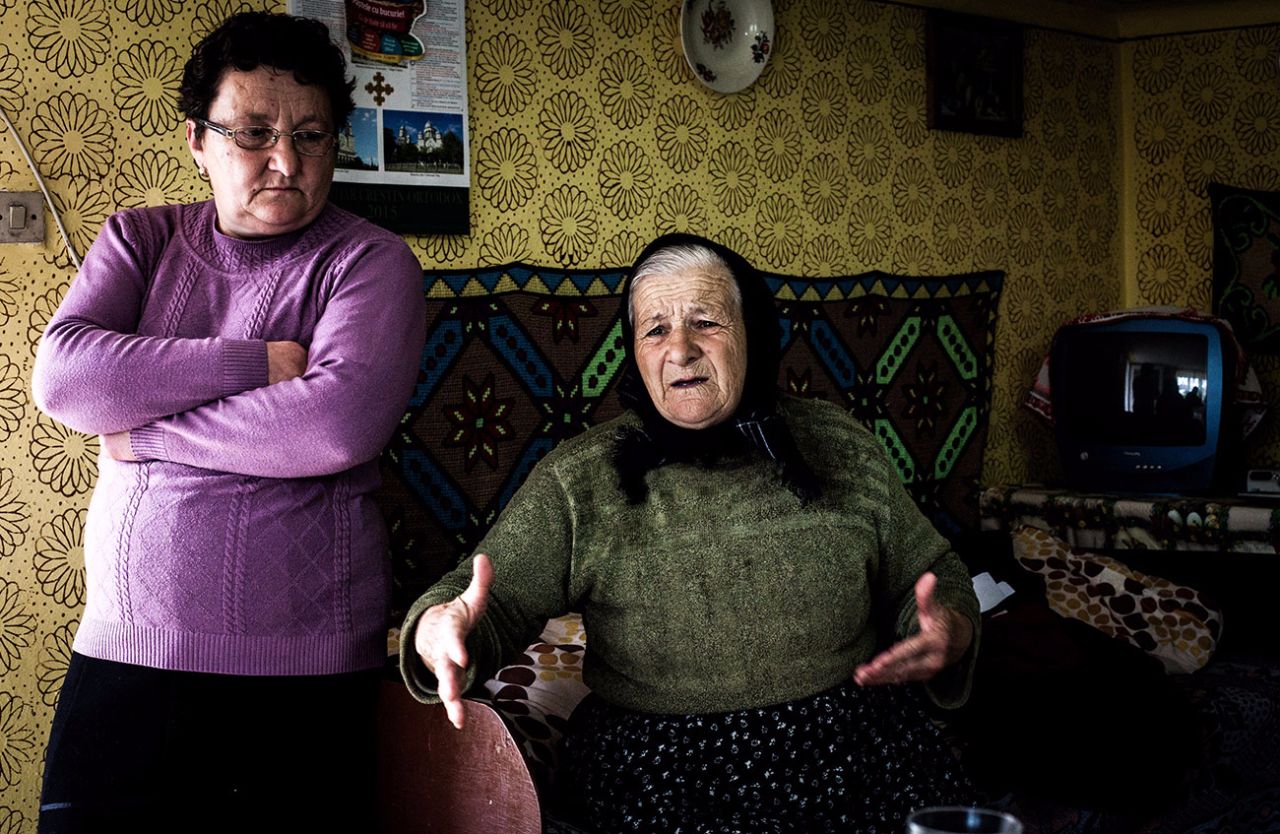 Marisca Ohra and her daughter Rodica Ohra in their kitchen talking about the murder of her husband. Maramureș, March 2015. 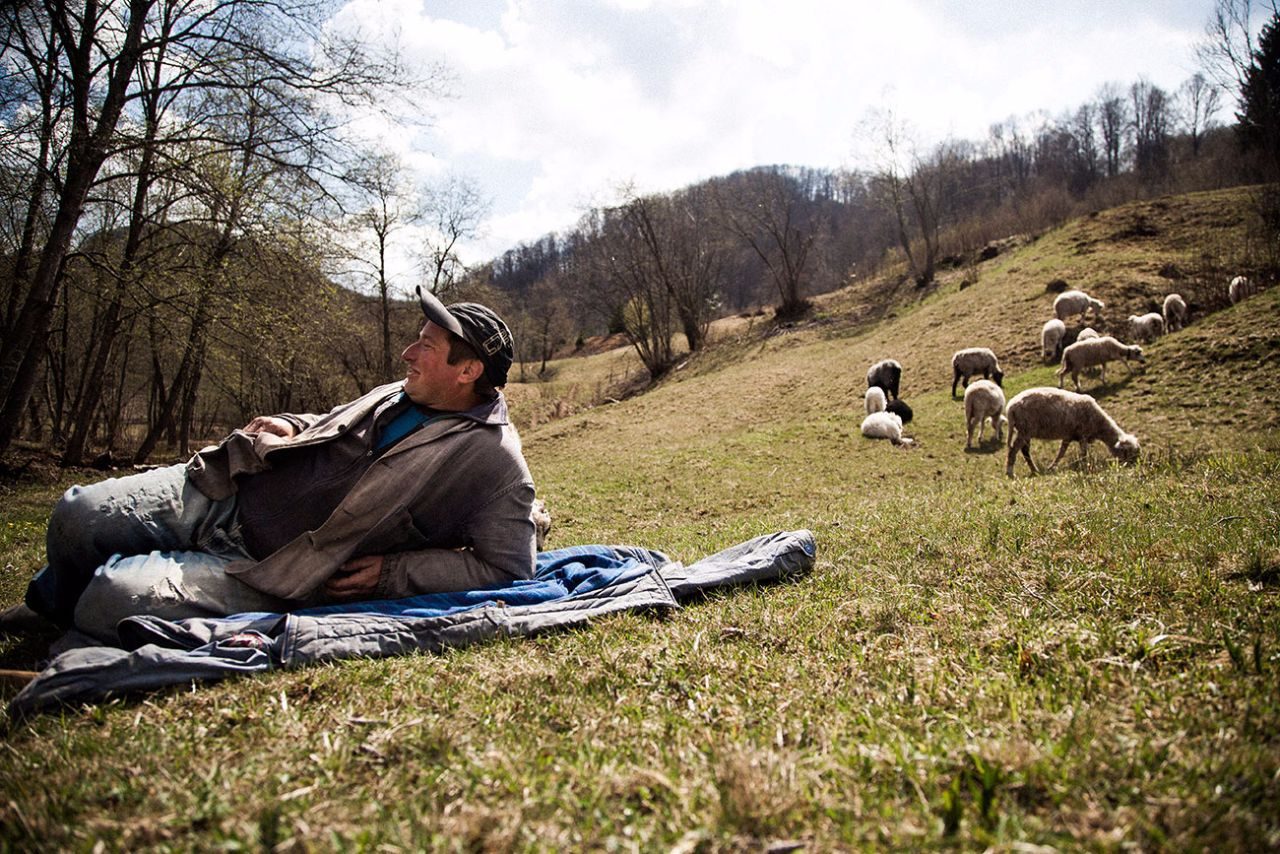 ‘It gets very boring doing this job, I am alone for days on end!’ A shepherd taking a break on a hillside in Maramureș. May 2015.

Ninety-four-year-old Vasile Lihet at his home in Maramureș. His house was one of the last wooden houses in his village, and more than two hundred years old. March 2015. Ciprian Radu outside his home in Săcălășeni. This was where one of his brothers murdered the other in a dispute over a hand’s breadth of land. March 2015.

This is a series of photographs I took while working with Adam Nicolson on ‘The Hand’s Breadth Murders’ in the rural Transylvanian area of Maramureș. Maramureș is a very traditional place, and on my first day out and about, my fixer Teo told me you could look all over the world without finding traditions that have lasted as long as the ones here. What’s even more distinctive about Romanian traditions is that they were never killed off during the twenty-four years of communism under the brutal dictator Ceaușescu. To this day you can drive through any given village in Maramureș and find women sitting out on hand-made gossip benches in full traditional regalia.

As Teo and I walked along the track, looking for the address of one of the people Teo had suggested we interview, Teo would greet gardeners outside each house we passed with ‘Hristos a înviat!’ – which translates into English as ‘Christ has Risen’. You would see a big smile appear on the face of the person Teo was greeting, and get a reply of ‘Adevărat a înviat’, which translates as, ‘Yes, Christ has risen’. This was a greeting used only for the months following Easter Sunday, and a way of establishing yourself as ethnic Maramureș, in touch with the land’s traditions.

One morning was spent chasing a lead Teo had gotten with the former Mayor of Săpânța. As we sat in her kitchen while she spun wool quietly into the floor, her husband came in, sat down and stared out of the window in silence. When we asked her whether she knew of any cases of murder that had occurred over a dispute of land, she simply replied, ‘I do not want to talk of bad things’, and that was that.

It is very easy to understand the angst older generations here have about the loss of tradition. In most villages traditional wooden houses are being crowded out by multiple-balconied, garishly-painted concrete buildings, erected with money from Western Europe. As people walk past they tutter at the open display of what they consider a ‘middle finger’ to the ways of village life. When I did happen to get invited into these houses, quite commonly the family still lived in one room and used an outside toilet.

It’s the same all over the world – the young are not interested in keeping traditions going. Heating a house from an open fire, making your own clothes and ploughing a field in the hot sun with a disobedient horse – it’s difficult to see the point. But keeping a traditional way of life going, like that in Maramureș, means a steady stream of tourists from all over, coming to experience a medieval existence in the modern world. One woman I visited said, ‘I can’t let you take any photos of me, my children who live in the city say they keep seeing me on the Internet!’

It’s hard to say what will become of this section of Transylvania. While I was there, there was a definite sense of hopelessness among the elderly that the young were not interested in continuing the traditional way of living. For my part, I have never seen a more unique way of life anywhere in Europe, or a community that holds more firmly to the values and principles of their ancestors than the people in and around the hills of Maramureș do.

Gus Palmer is a social documentary photographer. He is currently working on a long-term project documenting various migration routes into Europe.

‘It is what happens in a place where revenge is the only justice.’

There is no excerpt because this is a protected post.

‘In Hollin Hills, we believed our flatware could change the world.’ Jennifer Kabat on the intersection of modernist architecture and espionage.

‘It creates deep-seated wells of rage that find no release.’

‘Every day, I see a monstrosity in the kissing hole.’