Yuka Igarashi talks to Tao Lin about sense of place within the novel Taipei, his online presence and abstraction and metaphor in his writing.

Tao Lin is the author of three novels, two collections of poetry and one story collection. His latest novel, Taipei, was published in June 2013, and has been called ‘a gigantic leap forward’ and ‘a fascinating book, bone dry, repellent, painful, but relentlessly true to life’. During his book tour, he answered questions for Granta’s managing editor Yuka Igarashi, about sense of place within the novel, his online presence and abstraction and metaphor in his writing.

YI: I was wondering about the relationship between drugs and technology in the novel. They are both a constant presence in the characters’ lives. How do you see the connection between the two?

TL: The word technology is used in the book to mean something like ‘the non-circular, linear-seeming aspect of a system.’ But I don’t think Paul, the protagonist, thinks about the word technology when he’s using computers or emailing or, say, using a fork (which could be viewed as a one-step, linear movement from ‘hands’ to ‘fork’ in the system of ‘eating’); or, he does, but rarely, and the narrator doesn’t document those instances. Except once, around 70% into the book, when Paul is on a bus in Taipei looking out his window at night:

[Paul] sleepily thought of how technology was no longer the source of wonderment and possibility it had been when, for example, he learned as a child at Epcot Center, Disney’s future-themed ‘amusement park’ that families of three, with one or two robot dogs and one robot maid, would live in self-sustaining, underwater, glass spheres by something like 2004 or 2008. At some point, Paul vaguely realized, technology had begun for him to mostly only indicate the inevitability and vicinity of nothingness. Instead of postponing death by releasing nanobots into the bloodstream to fix things faster than they deteriorated, implanting little computers into people’s brains, or other methods Paul had probably read about on Wikipedia, until it became the distant, shrinking, nearly nonexistent somethingness that was currently life—and life, for immortal humans, became the predominate distraction that was currently death—technology seemed more likely to permanently eliminate life by uncontrollably fulfilling its only function: to indiscriminately convert matter, animate or inanimate, into computerized matter, for the sole purpose, it seemed, of increased functioning, until the universe was one computer. Technology, an abstraction, undetectable in concrete reality, was accomplishing its concrete task, Paul dimly intuited while idly petting Erin’s hair, by way of an increasingly committed and multiplying workforce of humans, who receive, over hundreds of generations, a certain kind of advancement (from feet to bicycles to cars, faces to bulletin boards to the internet) in exchange for converting a sufficient amount of matter into computerized matter for computers to be able to build themselves.

Your characters use things like Twitter and iMovie as part of their artistic output. For instance, Paul has a file of tweet drafts (he drafts the tweets before he posts them). They’re not just unfiltered life broadcasts or a way to publicize yourself. This media also seems to provide a way towards introspection for the characters by creating a certain distance from themselves, if that makes any sense. Do you think that’s true, and do you use media in that way?

Thank you for noticing that. I do think that is true, and I do think I use Twitter, etc. in that way. I would say more about this but I feel you’ve articulated it well, and would like to direct the reader back to your question, as part of my answer. 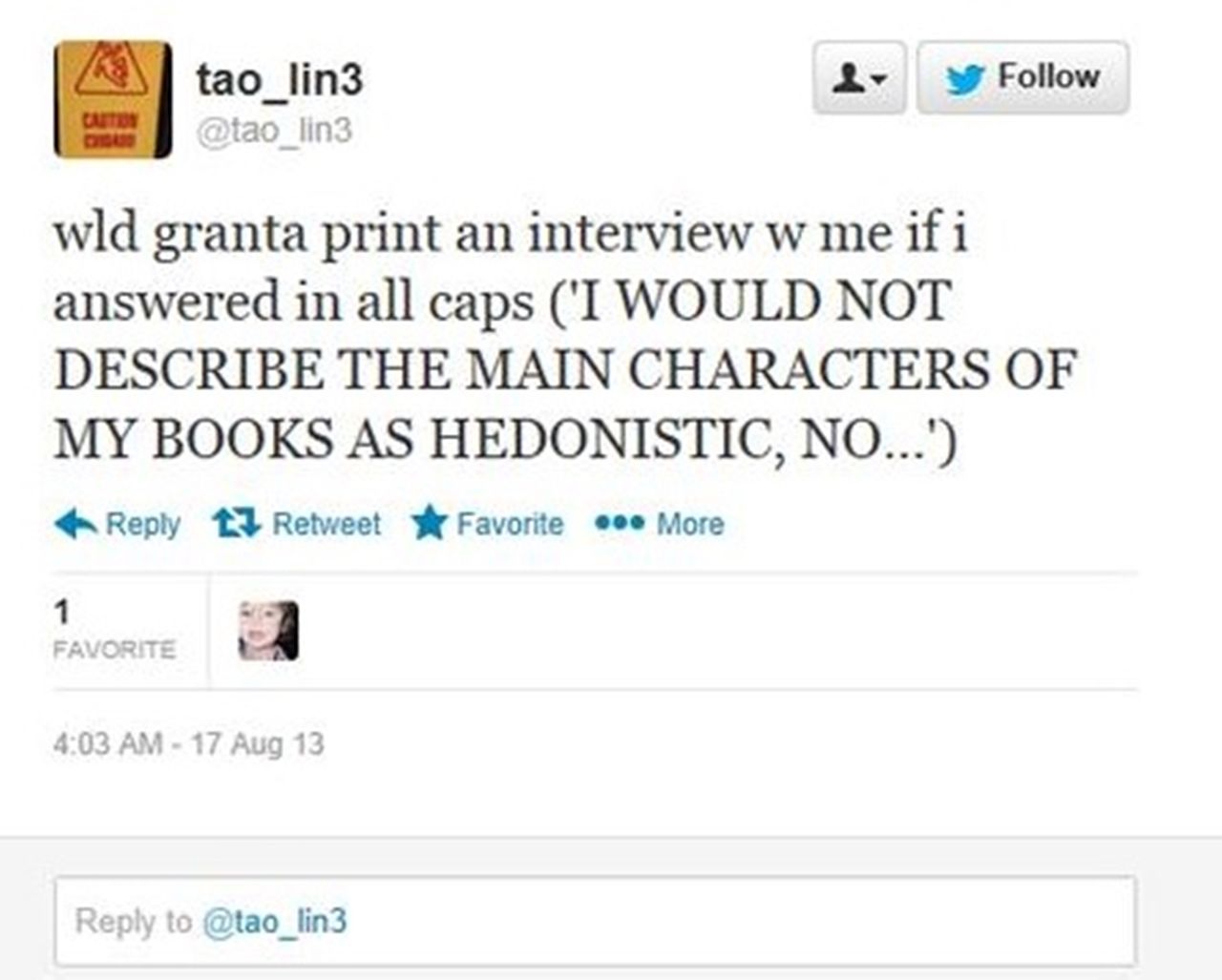 Your writing makes me aware of the ways we act on our bodies, calibrating and ingesting things in precise doses, whether it’s a juice with certain ingredients or an exact number of milligrams of Xanax. It seems clinical and goal-oriented rather than escapist. Are you consciously depicting a new way that we relate to our bodies?

I think maybe, for certain readers of fiction, I can seem to be depicting a new way that we relate to our bodies, but I don’t think a new way exists. I think probably most people have always been aware of the amounts of juice and food and [anything] that they ingest. But maybe the majority of fiction books (or the majority of what’s widely read today, that I know about) have, for whatever reason, mostly used non-objective language, like ‘a few’ or ‘many’ or ‘a handful’ or ‘a pile’ or ‘countless’, to quantify pills or juice or food.

When typing my answer I was struggling a little to not use the word drugs, or drug, and I noticed (and liked) that you avoided the word.

Do you see yourself as part of a lineage of authors that write about hedonism? I’m not sure I would call your characters hedonistic, would you?

I wouldn’t call my characters hedonistic, because I try not to think of anyone (in books, or in concrete reality) in terms of single words or terms. If I do use language that categorizes and simplifies I try to use it in a way that shows I’m aware – and I’d like the reader or listener to be aware – that, for whatever reason, I’m compromising the complexity and actualness of a thing. I like your questions.

Paul and Erin and other characters travel around America and to Taipei but it seems like they bring or create their own atmospheres, with drugs, etc. Where they are is almost secondary. How important is setting, place and travel to this book?

In this book – kind of unexpectedly, to me, as I wrote and edited it – place and setting do have some relevance to Paul, who thinks of Taipei as ‘a fifth season, or “otherworld”, outside, or in equal contrast with, his increasingly familiar and self-consciously repetitive life in America, where it seemed like the seasons, connecting in right angles, for some misguided reason, had formed a square, sarcastically framing nothing. . .’ at one point after having these thoughts:

Because his Mandarin wasn’t fluent enough for conversations with strangers. . . he’d be preemptively estranged, secretly unfriendable. The unindividualized, shifting mass of everyone else would be a screen, distributed throughout the city, onto which he’d project the movie of his uninterrupted imagination. Because he’d appear to, and be able to pretend he was, but never actually be a part of the mass, maybe he’d gradually begin to feel a kind of needless intimacy, not unlike being in the same room as a significant other and feeling affection without touching or speaking. An earnest assembling of the backup life he’d sketched and constructed the blueprints and substructures for (during the average of six weeks per year, spread throughout his life, that he’d been in Taiwan) would begin, at some point, after which, months or years later, one morning, he would sense the independent organization of a second, itinerant consciousness—lured here by the new, unoccupied structures—toward which he’d begin sending the data of his sensory perception.

But, in most moments, I think, Paul knows that the above has more to do with language and appearance (that he doesn’t fluently speak a certain language, combined with that certain language being spoken by people who slightly, but underscored by culture, appear a certain way) than with place or travel. That those elements, of language and appearance, are connected, in this instance, with a place, Taipei, is secondary, I feel, to those elements themselves. It’s more ‘this or that’ than ‘here or there’, though sometimes Paul maybe thinks of it as ‘here or there,’ because it’s comforting to imagine that abstract change can be achieved by physical effort – by sitting on a plane, or walking to a park, or moving one’s belongings into a different room and sleeping there every night.

Some of the most moving passages in the book to me have to do with Paul’s childhood and his memories of being a child and a teenager. They are a contrast to his present in so many ways. Did you see Paul’s memory and childhood as serving a particular purpose here?

They provide an indirect explanation, if the reader wants one, and if the reader thinks in these terms, of Paul’s current behaviour. They’re also kind of a natural result of the narrator’s focus, in this book, on Paul’s thoughts and feelings, rather than only his behaviour. Another purpose, I think, of probably most sentences in the book (and probably of most sentences in most books) is to produce emotions in the reader, and an effective way to do that is to show inner states, which often are unexpected and counter-intuitive with what’s visible. This answer sounds like it could be included in a study guide for this book, or other books, or an essay on this book. I’m glad you found those passages moving.

One thing that surprised me was Paul’s relationship with his mother, which seems intense and more emotional than his other relationships. It’s also different from how Asian immigrant families are usually depicted, where parents are strict and children are taught to be obedient. Do you think this is unique to Paul’s experience or is it generational?

Your prose style is noted for being literal and concrete, but the metaphors in Taipei are one of things I most loved in the book: Paul waking up is like opening a zip file, the city as a stranded alien entity. What, if anything, is this book doing with language that your previous books have not?

I’m glad you liked the metaphors. The prose style of the narrator of my 2 previous books, Richard Yates (2010) and Shoplifting from American Apparel (2009), was literal and concrete, but my other prose books, Eeeee Eee Eeee (2007) and Bed (2007), have used metaphors and abstractions, and I view Taipei as a development of that, earlier prose style (which I feel has been most influenced by Lorrie Moore’s writing).

How has your experience of being published and doing events in the UK been so far? Is it very different from being in the US?

I like the UK more than the US, but I’m not sure that has anything to do with my book. In terms of events, based on my limited experience, audiences in the UK are much more attentive.

What has surprised you most about reactions to your book?

I’m not sure. Maybe the first 2 paragraphs of Benjamin Lytal’s review in the New York Observer.

Tao Lin is the author of seven books of fiction and poetry. His most recent books are the novels Taipei and Richard Yates.

Ruth Ozeki is the author of My Year of Meats, All Over Creation and A...

In Conversation | The Online Edition

In Conversation | The Online Edition

Rattawut Lapcharoensap’s first published story, ‘Farangs’, appeared in Granta in 2003. In 2007 he was...

In the latest Granta podcast, Yuka Igarashi talks to A.M. Homes, the recipient of this year’s Women’s Prize for Fiction for May We Be Forgiven.

‘I was going north to find a tree farm, in a land where there are no trees.’